Say YES to opportunities to do something and give in your very best... Laurels as rewards and excellence may all be yours! 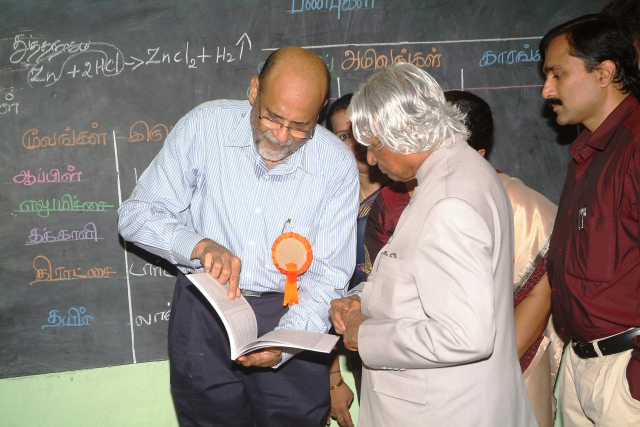 This suggestion is exemplarily reflected upon by Professor Sultan Ismail, Managing Director at Ecoscience Research Foundation and an accomplished award winning soil-biologist and ecologist who introduced VermiTech to the world.

VermiTech is a creative and environmentally sustainable technique for recycling biodegradable waste into fertilizer using local varieties of earthworms.

Professor Sultan Ismail, also an expert on soil bioremediation, while speaking to Raghu R Krishna as part of an interview, shared his reminiscences on his early days as a student, PhD researcher-scholar, and Teaching/Research experiences.

A student who did not succeed in getting his MPhil seat visited me at New College, Chennai. I was then teaching there having completed my MPhil. He narrated the ordeal he was facing then in his life on account of non-admission to MPhil. He was eager to do research and wanted me to help him...

I told him that while his interest is indeed commendable, I needed to know whether I am permitted to guide researchers in our department. So, I told him, I will go to the Head of the Department and enquire the feasibility of guiding researchers. As I was about to leave, I noticed a paper lying somewhere nearby and took it, placed it on the table-top, and left the room to meet the Head of the Department.

I met Professor Moinuddin and conveyed this student's interest in research. He himself was quite academically accomplished with having done his PhD from Canada. In reply to my question, he said: well, it was my long-standing desire that somebody must start research in my Department, here at our College... Wish you all the best, Go ahead!

These are the turning points that happen in life. We do not know why things happen and where they lead us to, in life. I was so happy, and I rushed back to the room to convey this news to the student. Very interestingly, the paper I picked up and placed on the table before heading to meet Professor Moinuddin was in-fact an ad-pamphlet carrying an invitation to present papers at Ethological Society of India (of which I later served as Vice President). They were inviting papers to be presented at an event they were conducting at Aligarh Muslim University in January as part of a national All India Seminar.

I asked this student – it is July now and would you be able to work on the paper and present it in January? He readily agreed; He enthusiastically promised that he can work on anything. And so, we decided we will have to work on our first paper good enough to be presented at an All India Seminar in about 5 months.

Ever reliable lab-staff of the college, Mr. Buhari, was just crossing our room as we were engaged in this conversation. I called him and enquired if there was any live specimen in our laboratory... and he said, Sir, there is an earthworm.

That is the origin to what later shaped as Vermitech. Infact, I was the one who coined this term, Vermitech. If at that moment, I had not agreed to work with the earthworm and demanded some other live specimen that wasn’t instantly available, I may have been nowhere. As life would have it, I pioneered the concept of vermitech, worked on a number of earthworm species, projects, pioneering concepts, etc.

So, I said, yes, please bring the earthworms and we began working soon-after. We designed a behaviour experiment, got interesting test results, we prepared and presented the paper... soon after that, there was another event in Bangalore on Soil Biology. This time, I too accompanied my student to the seminar event.... A gem of a professor from Madras Christian College was also present at the Seminar and the conversation I had with him after presenting the paper led to further milestones in my life...