All about St. Edmund’s College, Shillong - the second-oldest college in North-east India, right after Cotton College, Guwahati (now known as Cotton University). English Department of St. Edmund’s College is the only department to hold entrances. (Cover pic collated from https://sec.edu.in/)

About three and a half years ago I left home for college at Shillong, Meghalaya. When I had first visited the hill state of Meghalaya for the entrance test at St. Edmund’s College, I was a little skeptical of pursuing my Bachelors' degree in the Northeastern part of the country.

Being born and brought up in Assam, I knew that we lacked something that was inherent for kids of mainland India and this was despite the best education provided to us here. Naturally, Delhi University was what I had hoped for myself but fate is what happens when we are busy planning our lives. For various personal reasons, it was decided that I’d stay closer to home for the three years of undergraduate degree.

Every story has its own depth for me

The year was 2017, it was the month of May and heavy showers greeted me as I went to complete my admission procedure at the college that would eventually become a part of who I am today. St. Edmund’s College, Shillong is the second-oldest college in North-east India, right after Cotton College, Guwahati (now known as Cotton University).

The road leading to Shillong from Guwahati is one where we see the lessons of topographical changes come to life. Within just a distance of eighty kilometers, we witness a change of temperature and a transition from the humid Guwahati air to the chilly breeze of the hilly abode of Meghalaya! I was in love with the Meghalaya sky on my very first trip to the place.

At this point, it’d be appropriate to mention that I was fond of reading and writing ever since the age of five and naturally, I knew no better than opting for Humanities after Tenth and English Literature after Twelfth.

Coming back to my college, the English department (above picture courtesy) of St. Edmund’s College is the only department to hold entrances, the rest of the departments go by the first-come-first-serve policy. So, I had to sit for an entrance, wherein we were asked to give a critical appreciation of a poem. The results were declared by the evening of the same day and luckily for me, I got through!

Then began the saga of three years of studying literature at the Scotland of the East where I was taught by the finest faculty, met the friendliest locals, ate the tastiest momos, and inhaled the purest air!

Though not at par with the advanced syllabus of several other universities of the country, North-Eastern Hill University (NEHU) does ensure that students learn their lessons right. My college particularly is a semi-govt. college and therefore attendance is very important to us. We are taught just like schools, never did I feel the light-hearted and casual vibe that is portrayed in Bollywood movies.

We had regular classes and took down notes, sat in the library, and completed assignments just as we did at school! What set my department at Edmund’s apart from the English departments of other colleges in NEHU was the fact that our department hosted an annual play, the likes of which were hard to find in the whole of Meghalaya.

I regret not being more active in the Department play but as a viewer, if I have to describe our plays (without being biased), I’d just say that watching the play was no less than watching a movie being screened – it’s that flawless! And, northeast being the rock capital of the country, the melodious voices of students from all tribes and states of Northeast singing in the choir as the play progressed created a whole new ambiance in the Auditorium.

The extracurricular made it even more special

The English department also has a magazine of its own – which has been in existence for decades now and we take pride in the fact that our magazine has inspired the other departments of the college to publish their magazines as well. The department magazine is a platform for the budding writers of the department to share their musings and hence, the magazine is rightly called “Musings.” 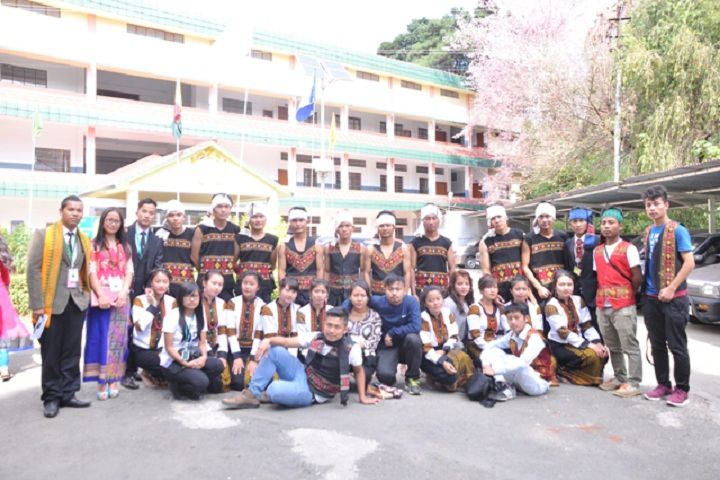 Usually, the final year students take the lead in editing the magazine and I was one of the editorial team members of Musings in my final year. That’s a gist of the activities undertaken by the English department of the college.

Talking about the co-curricular activities on campus would first take me to the College Week – that’s the time every Emdundian is seen smiling and interacting, taking part in competitions, and preparing cultural events for the cultural day/ inaugural day. We have themes for each day of the week and these themes are decided by the Animators in charge.

Based on the themes, the decorations are prepared and students also dress up accordingly. The screening for Animators and General Animator is another sight to behold! Since we do not have any student political body in the college (the college is governed by the Congregation of Irish Brothers), the selection of the Animators is quite a big deal.

Luckily for me, I was the Animator for Literary Activities in my final year of college and we organized several literary and creative competitions throughout the college week, as was done by the sports and cultural animators. The themes selected for college week usually include Prom Day, Twinning, Bohemian day, Halloween day, Pyjama party, etc. College week is the perfect time to witness the folk dances of all tribes of Northeast India – it’s as if the seven sisters dress up and sing in unison the song of national brotherhood!

Apart from the college week, there is the college magazine “The Edmundian”, the various competitions organized on Founder’s Day and other important days of the year. Recently, several clubs have been incorporated into the campus such as the Book Club, the Botanical Club, the Drama Club, etc.

The NSS and NCC cells of the college are very active year-round and participate and organize various cleaning and donation drives which keep the students motivated towards being empathetic and responsible citizens.

Everything about St. Edmund’s echoes of optimism and opportunities – the college motto of ‘Facta non Verba’ (which translates to ‘Deeds not words’) is instilled in the heart of every faculty member and student which is evident even in the University End Semester results from every year where maximum rank holders are seen to be Edmundians!